Czech President Vaclav Klaus on Thursday approved the government's plan to introduce an electronic road toll system for trucks in 2007, the presidential office said in a statement. 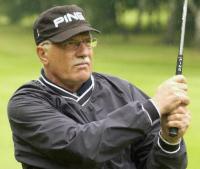 The plan has already been approved by the Czech parliament.

According to the plan, trucks weighing more than 12 metric tons (13.2 U.S. tons) will be required to pay the toll. The government plans the system to operate on some 2,100 kilometers (1,300 miles) of Czech highways and major roads.

The government expects the system to make some 10 billion koruna ( Ђ 354 million; US$423 million) a year.

Austrian electronic communications company Kapsch AG won the tender for the toll system in November in a deal worth 640 euros (US$763 million).

The system, which is identical to the Kapsch microwave system currently used in Austria , was criticized by some experts who have argued that it is outdated, suggesting a more modern satellite system was more suitable for toll collection in this Central European country, reports the AP.