A Hamas spokesman said Thursday that the militant group, which is to take over the Palestinian government this month, has been invited to South Africa for talks with officials. 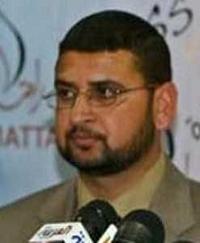 No timetable has been set for the visit, spokesman Sami Abu Zuhri said.

The invitation dealt yet another blow to Israel 's efforts to isolate Hamas, which has refused to renounce its violent anti-Israel campaign since sweeping Palestinian elections on Jan. 25

"We would be concerned that giving legitimacy to an unreformed Hamas could stifle the possibility that the movement will transform itself from a terrorist organization to a political party," Israeli Foreign Ministry spokesman Mark Regev said.

Hamas leaders are due to visit Russia on Friday and have also been invited to Venezuela for talks with government officials there. Senior Hamas officials have already met with Turkey 's foreign minister.

Abu Zuhri said that while in Moscow , Hamas would ask for economic and political support.

The Palestinian Authority desperately needs an infusion of foreign aid.

Israel has already stopped the transfer of payments it owes to the Palestinian Authority, and the West has also threatened to cut off aid if Hamas doesn't renounce violence and recognize Israel 's right to exist, reports the AP.