Prime Minister Ibrahim al-Jaafari canceled a meeting Thursday with Iraq's top political leaders after they agreed to mount a campaign to deny him another term in a bid to jump-start stalled talks on a new government drawing in the country's main ethnic and religious blocs. 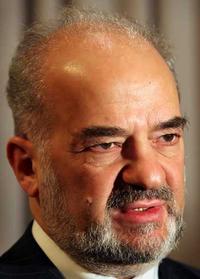 Al-Jaafari had called the meeting to discuss ways to resolve the political standoff and contain a surge of sectarian killing that pushed Iraq to the brink of civil war.

Violence claimed at least 31 more lives Thursday. Among the bloodiest attacks were the bombing of a vegetable market in a mostly Shiite section of Baghdad and an assault on an Iraqi checkpoint north of the capital.

Gunmen also attacked the car of a top Sunni Muslim political leader, killing one bodyguard and wounding five. Adnan al-Dulaimi, a leader of the Sunnis' largest parliamentary bloc, had already sped away in another vehicle after his car was stopped by a flat tire, said Yassir al-Obeidi, a spokesman for his conference of the People of Iraq party.

The talks on a new government broke down last week when Sunni parties pulled out in protest against attacks on Sunni mosques triggered by the Feb. 22 bombing of a sacred Shiite shrine in the central city of Samarra. Hundreds were killed in the sectarian fury that followed.

They included 45 Sunni preachers and mosque employees, according to Sheik Ahmed Abdul Ghafour al-Samaraie, head of the government's Sunni Endowment, which takes care of Sunni mosques and religious shrines.

He told a news conference Thursday that 37 Sunni mosques were destroyed and 86 damaged by grenade, rocket or gun fire. Six others remained in the hands of Shiite militiamen, he said. U.S. military officials put the figures much lower.

Yet another Sunni cleric was gunned down as he left a mosque after dawn prayers Thursday in Basra, in the southern Shiite heartland. It was not clear whether al-Samaraie included the cleric in his count, reports the AP.