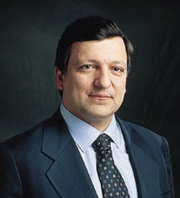 Barroso said that Ljubljana was meeting economic criteria and fast approaching its target of introducing the euro on Jan. 1, 2007.

"After joining the EU, Slovenia can be considered a success story," Barroso said following a meeting with Prime Minister Janez Jansa. "Slovenia will most likely be the first new member to join Eurozone."

Barroso, who was in Ljubljana for a two-day visit, added that Slovenia was meeting key political goals in readying itself to be the first of the new member nations to take on the EU's rotating six month presidency in 2008.

Slovenia joined the EU in May 2004 along with nine other mostly former communist countries. It is the only newcomer so far on par to adopt the euro before 2008.

Barroso said that Slovenia had an obligation to spread its prosperity and stability to its Balkan neighbors, reports the AP.