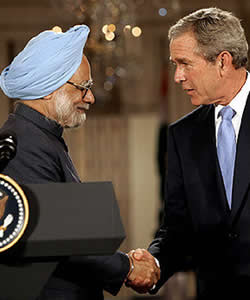 Under the accord, elusive until the last minute, the United States would share American nuclear know-how and fuel with India to help power its fast-growing economy, even though India won't sign the Nuclear Nonproliferation Treaty. It would represent a major shift in policy for the United States, which imposed temporary sanctions on India in 1998 after it conducted nuclear tests.

Bush, turning immediately toward selling the deal to skeptics in the U.S. Congress, called it "a necessary agreement."

"It's one that will help both our peoples," he said.

"But for his leadership, this day probably would not have come so soon," Singh said.

Later in the week, Bush was heading to Pakistan where on Thursday at least one bomb ripped through the parking lot of the Marriott Hotel in Karachi, exploding windows in the nearby U.S. consulate. Bush said he had been briefed on the bombing and been told that the victims included at least one U.S. citizen, a foreign service officer he did not identify by name.

The attack occurred hundreds of miles from Islamabad, where Bush's events were taking place, but underscored the need for the extraordinary security planned for his visit there.

Bush said the attack would not deter him in his travels.

"Terrorists and killers are not going to prevent me from going to Pakistan," he said.

Bush and Singh signed an agreement in July to provide India with nuclear fuel for the country's booming but energy-starved economy. But it hinged upon determining how to segregate India's nuclear weapons work from its commercial nuclear program, and place the latter under international inspection, in a way that satisfied both sides.

Some lawmakers in Washington contend that the Bush administration is essentially making a side deal to the international nonproliferation treaty. Critics in India, meanwhile, are wary that the United States is meddling in Indian affairs, and is using India as a counterweight to China's growing economic and political influence.

The president acknowledged that convincing lawmakers would be difficult, reports the AP.