A fire that swept through a bus in southwest China after its engine overheated killed 16 passengers, state media said on Thursday. 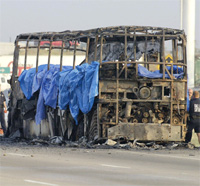 The blaze flared after the driver pulled over on an expressway in Guangxi province and lifted the bus's hood to check the engine, the Beijing News said.

The bus was carrying 42 passengers bound from southwest Sichuan province to the southern boomtown of Shenzhen neighbouring Hong Kong.

The 16 dead were mostly men who had been helping women and children escape the flaming vehicle, the report said.

It said the passengers had been trapped because most of the windows could not be opened and the door was jammed shut when the fire damaged the electrical system.