The Vila Isabel samba group, backed by Venezuelan oil money, was declared Carnival champion Wednesday for its parade calling for unity among the people of Latin America. 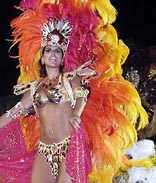 Vila Isabel's victory ended the reign of the Beija Flor group, which had won the last three carnivals in a row and was a strong contender to repeat the feat this year.

The victory was just the second for Vila Isabel, which also won in 1988.

The group's parade, entitled "I'm Mad About You America," was sponsored largely by the Venezuelan government oil company Petroleos de Venezuela SA, or PDVSA, which led to rumors that Venezuelan President Hugo Chavez would attend the celebrations.

In the end, Chavez did not attend the parade, but the samba was the favorite with the judges.

Rio's samba parade is a hard-fought competition among the city's 14 top-tier samba groups, which present 80-minute parades featuring thousands of costumed dancers, drummers and singers. The parades can cost some US$2 million (Ђ1.6 million) each.

Victory at the competition is an honor that brings a trophy and the possibility of lucrative sponsorships, but no cash.

A panel of 40 judges examines everything from the music and lyrics to how much enthusiasm the group generates among the 70,000 spectators and how evenly the paraders flow through the 700-meter (half-mile) Samadrome stadium.

The loss of even a tenth of a point can doom a group's chances of winning, so fans were holding their breath until the final scoring was announced.

The Independent League of Samba Schools, which organizes the parade, will reduce that number to 12 in 2008 to shorten the length of the two-night parade. This year, the final schools finished parading shortly before 8:00 a.m. local time (0500 GMT).

The top six schools will strut their stuff again Saturday night at the Champions' parade, the Carnival's climax, reports AP.