Myanmar soldiers raided the hideout of an Indian rebel group in northern Myanmar, triggering a gunbattle that killed up to 10 soldiers and two rebels, a guerrilla leader said Tuesday. 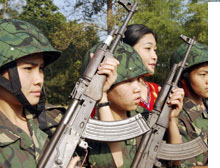 "We have lost two of our fighters and have killed up to 10 Myanmar army soldiers," he said.

His claim could not be independently verified.

More than 4,000 NSCN militants operate out of 50 bases inside Myanmar, according to leaders of the group.

Myanmar has told India it would help fight the rebels and the Myanmar army has launched two major raids on the NSCN group since December.

The rebels and the Indian government agreed in January to extend a cease-fire for six months following peace talks in Bangkok, Thailand.

The Naga rebels, who have been fighting for more than 50 years, want special status for Nagaland state, which borders Myanmar and is home to most of India's 2 million Nagas. India is predominantly Hindu, while most Nagas are Christians, reports the AP.