The main opposition party will challenge Uganda's presidential and parliamentary election results in court, charging Tuesday that officials did not allow a large number of voters to cast their ballots and the results were falsified. 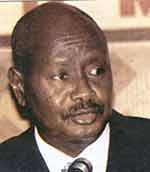 On Saturday, the Electoral Commission declared President Yoweri Museveni winner of the presidential poll held on Thursday. The president, who has held power for more than 20 years, won 59.28 percent of the votes, according to results from 99 percent of polling stations.

His strongest opponent, Kizza Besigye, had 37.36 percent of the vote, according to the Electoral Commission.

"We reiterate our decision to reject the results of the recent presidential and parliamentary elections. We have now set up a legal team to contest the results in court," Besigye told journalists Tuesday.

He charged hundreds of thousands of registered voters could not cast their votes, the results were falsified, there was bribery and "lots of other illegal activities contrary to presidential elections law."

On Saturday, Besigye had said that the tallies collected by his agents at the country's 19,786 polling stations showed him with 49.1 percent and Museveni with 47.1 percent, reports the AP.