Turkish Prime Minister Recep Tayyip Erdogan called on world leaders on Tuesday to help defuse sectarian violence in Iraq , saying the crisis there could spread beyond Iraq . Erdogan, speaking in parliament hours before a meeting with Iraqi Prime Minister Ibrahim al-Jaafari, also called on Iraqi leaders to avoid provocations and work together to form a broad-based government that would avoid the supremacy of one group over others. 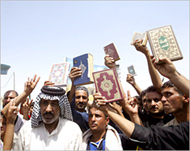 "We want all international actors ... to help the people of Iraq and the government of Iraq ," Erdogan said. "It is certain that everyone will suffer unless the flames of ethnic tensions that are being provoked are extinguished," Erdogan said. " Sparks that are not brought under control in time can rapidly turn into a global problem."

Turkey is concerned by the recent violence in neighboring Iraq which was sparked by a bomb attack that destroyed the golden dome of the Shiite Askariya shrine. The attack triggered a wave of reprisal attacks on Sunni mosques, pushing Iraq toward civil war.

Ankara fears a civil war in Iraq could lead to the creation of a separate Kurdish state in the north, which could in turn inspire Turkey 's own Kurdish population to call for independence. Turkey is urging Iraqis to put the sectarian violence behind them and work toward the creation of a national unity government.

Al-Jaafari arrived in Ankara Tuesday for talks with Erdogan, Foreign Minister Abdullah Gul and President Ahmet Necdet Sezer. He said discussions would center on possible Turkish help to overcome water and energy shortages as well as improving transportation in the country.

But in Iraq , President Jalal Talabani, a Kurd, blasted al-Jaafari, who is Shiite, for making the visit without informing him and warned that any agreement reached in Turkey would not be valid. The political spat made public Tuesday underscored the deep political tensions within Iraq's ruling political circles as politicians there struggled to form a new government nearly three months after parliamentary elections.

Erdogan said he would discuss with al-Jaafari what Turkey can do to help overcome the tensions. "It is of vital importance that a government is broad-based, does not exclude any group and allows the creation of a democratic Iraq ," Erdogan said. "To ensure peace requires a stronger determination than war and conflict."

He said Turkey was trying to convene a new regional meeting between Iraq and its neighbors to help overcome the tensions. "It is our common responsibility to ensure that the spirit of solidarity prevails and that the fire is extinguished before spreading elsewhere," Erdogan said.

"The situation there is becoming grave, there is almost a fight between religious factions which would not only be limited to Iraq ," said Justice Minister Cemil Cicek said after a Cabinet meeting on Monday. At this stage, Turkey is trying to say what it has to say." Radical Shiite cleric Muqtada al-Sadr, whose militia was blamed for many attacks on Sunnis, was also expected to visit Turkey after al-Jaafari. Cicek said it was not clear when al-Sadr would visit Turkey , reports the AP.