About 70 whales found beached near Tokyo

About 70 whales were found washed up on a beach near Tokyo on Tuesday, but surfers and local residents cooperated in returning the mammals back to sea, a town official said. Surfers initially reported seeing several whales beached up in Ichinomiya , 70 kilometers (43 miles) each of Tokyo , Tuesday morning, said Ichinomiya town spokesman Takeshi Ide. 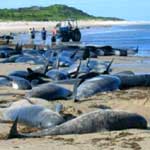 About 70 whales found beached near Tokyo

Ide said local officials later confirmed about 70 melon-headed whales had washed up on shore in the Pacific coastal town of Ichinomiya . The whales, each about 2 meter (3.3-foot) long, resemble dolphins and usually inhabit only deep water, according to another town official Mieko Ishii.

Several local residents and about 50 surfers joined in the rescue and carried the whales back to the water, Ide said. It was not immediately known why such a large number of whales washed up at one time, he said, reports the AP.