The Iraqi president on Tuesday blasted the country's prime minister for making a visit to Turkey without telling him and put the Turkish government on notice that any agreements made during the visit would not be considered valid. By making the internal political spat public, President Jalal Talabani underlined the continuing deep political tensions within the country's ruling political circles even as politicians struggle to form a new government nearly three months after parliamentary elections. 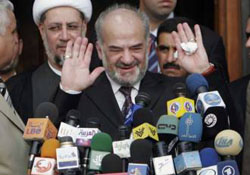 Talabani's statement expressed "surprise" that Prime Minister Ibrahim al-Jaafari had journeyed to Turkey "without informing all sides in the Iraqi government" as, the president claimed, was required by law. Talabani said the Transitional Administrative Law, which dictates the work of the interim government, bars it from the "right to conduct talks with other countries which might result in agreements or joint statements or memoranda of understanding that could impose on the permanent (next) government obligations that it might not able to fulfill." Talabani expressed "regret" over the al-Jaafari visit and said "the government is not obliged to adhere to any agreement that the prime minister might make with Turkey , with which we are keen to have the best relations on the basis of law and neighborly goodwill", reports the AP.