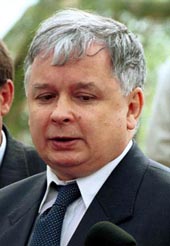 Kaczynski was scheduled to meet with President Viktor Yushchenko on the first day of his two-day trip, which will also take him to Kharkiv in Ukraine's Russian-speaking east, where many still consider Moscow to be Ukraine's most important partner.

He told journalists at the airport that he planned to discuss Ukraine's European ambitions, questions of energy security and, possibly, relations with Russia, Ukraine's Interfax news agency reported.

Kaczynski's visit comes just weeks before parliamentary elections that could determine whether Ukraine continues to push for speedy membership in the European Union and NATO or tilts back closer to Russia.

Kaczynski's predecessor, former President Aleksander Kwasniewski, angered Moscow with his support for Ukraine's Orange Revolution protests in 2004 which helped bring Yushchenko to power over a candidate backed by Moscow.

Poland, once Ukraine's enemy, has become one of Kiev's closest allies in Europe, pushing for its membership in NATO by 2008 and calling on the EU to leave the door open to new members.

While NATO membership is championed by Yushchenko, the majority of Ukrainians remain deeply suspicious of their former Cold War foe and fear that the involvement in the alliance would drag Ukraine into new conflicts. Entering NATO has become a top campaign issue ahead of the March 26 election with a number of parties saying they would block any effort to join, reports the AP.