Domestic fowl have tested positive for an H5 subtype of bird flu in three villages in eastern Romania , an official confirmed Tuesday. Samples from the dead hen, turkeys and geese from the villages were sent to the capital for further tests to determine whether they had the deadly H5N1 strain of the virus, said Danut Culetu, the top government official for Constanta county where the dead birds were discovered. 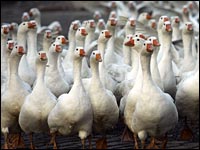 Culetu told reporters that authorities were waiting for the results before culling birds in the villages of Crangu, Satu Nou and Anghel Saligny and imposing a quarantine. Authorities on Monday quarantined the nearby village of Topalu near the Black Sea , where domestic fowl tested positive for H5N1 in Bucharest laboratory tests.

The deadly virus has been found in nine places in Constanta .

Cars and other vehicles traveling out of the villages were being disinfected Tuesday. H5N1 was first detected in Romania in October, when it was found in domestic fowl in the Danube Delta, a large natural reserve visited by hundreds of thousands of migratory birds. Since then, there have been over 30 outbreaks in small villages, forcing authorities to cull over 150,000 domestic birds.

The virus has spread from Asia to at least 10 European countries and Africa , and scientists fear it could mutate into a form that is easily transmitted between humans, sparking a pandemic. The disease has killed at least 92 people, mostly in Southeast Asia , according to the World Health Organization, reports the AP.