A moderate earthquake jolted southern Iran on Tuesday but no casualties were initially reported, state media reported. The moderate temblor shook Orzoueih, a small town about 1,000 kilometers (620 miles) south of the capital Tehran . Moderate quakes have killed thousands of people in the past in the Iranian countryside where houses are often built of mud bricks. 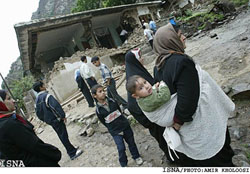 Varying figures were given for strength of the earthquake. The head of the Tehran Semiology Center , Mahdi Rezapour, said it was of magnitude 5.8, and state TV used the same figure But state radio said it was of magnitude 5.6, and the first Iranian agency to report the temblor, the semi-official Iranian Students News Agency, put it at 5.9. The discrepancies could not be immediately explained.

The television said the quake occurred at 11:01 a.m. local time (0731 GMT) and was felt in several other southern towns, such as Kerman , Jiroft, Kahnooj and Baft. The governor of Baft province, identified only as Amini, told state radio that the quake caused walls to crack in villages, but there were no immediate reports of casualties.

"No deaths have yet been reported, but the quake has caused cracks in many buildings. The region hit by the quake is where the houses are made of mud brick," he said. In February 2005, a 6.4-magnitude temblor rocked Zarand, a town of about 15,000 people in southern Iran . It killed 612 people and injured more than 1,400, leveling several villages and leaving thousands of people homeless.

A magnitude-6.6 quake flattened the historic southeastern city of Bam in the same region, killing 26,000 people. Iran is located on seismic fault lines and is prone to earthquakes. It experiences at least one slight earthquake everyday on average, reports the AP.