Angela Merkel marks her 100th day as German chancellor Wednesday, riding a wave of economic optimism that is drowning out years of gloom and has sent her popularity soaring. Few had great expectations when Merkel took office Nov. 22, two months after a poor election performance forced her to negotiate a left-right "grand coalition" of Germany 's biggest parties with predecessor Gerhard Schroeder's Social Democrats. 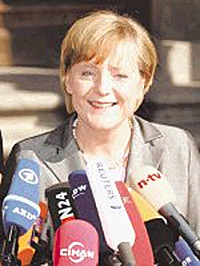 But the 51-year-old conservative, Germany 's first female leader, made a virtue of the forced marriage. She ditched unsettling talk of potentially painful reform in favor of reassuring promises to take "small steps" toward economic recovery. "If we succeed in restoring a bit of confidence in politics, bringing expectations and results together ... then I would think we have achieved a great deal," she said in a recent radio interview.

Germany 's problems have not gone away. The economy stalled in the fourth quarter; the jobless rate, while down a little from a year ago, stood at 12.2 percent in February. However, Merkel's government has approved legislation aimed at curbing the country's large budget deficit and launched a several-year, 25 billion (US$29.8 billion) investment program aimed at boosting the economy.

Merkel has impressed on a flurry of foreign trips. She helped broker a European Union budget deal, patched up relations with U.S. President George W. Bush, showed new firmness toward Russia and threw herself into efforts to resolve tensions over Iran 's nuclear program. Business and consumer confidence indexes have risen to levels unseen in years, helped by political harmony that contrasts with the partisan confrontation seen during Schroeder's seven-year term.

"Mrs. Merkel was to some extent underestimated before," said Lothar Probst, a political scientist at the University of Bremen . "She is proving that she can be competent, that she can represent Germany appropriately abroad and is able to lead the coalition." The Christian Democratic leader has won praise for her pragmatic, consensual style. She also faces feeble opposition from three small, ideologically incompatible parties, the Greens, the pro-business Free Democrats and the Left Party, dominated by ex-communists.

Der Spiegel magazine led this week's edition with an article describing Merkel's Germany as "the land of the smile", a mood many hope will be boosted by this summer's German-hosted World Cup. Polls have even given Merkel higher approval ratings than Schroeder or his conservative predecessor, Helmut Kohl, ever enjoyed. An ARD television poll released Feb. 2 found that 80 percent of 1,001 Germans surveyed were satisfied with her work, a 13-point gain from a month earlier. It gave a margin of error of plus or minus 3.1 percentage points.

Merkel isn't getting carried away. "I have been in politics too long to think that this situation will last," she has said.

With three state elections due March 26, her government has put the thorniest problems aside for now, among them reform of the public health insurance system, on which the two coalition partners failed to agree last year. Talk of liberalizing Germany 's rigid labor market, often cited by economists as the heart of the country's problems with sluggish growth, also has faded away, reports the AP.