The U.N. mediator for Kosovo met with Serbian officials on Tuesday to discuss the future of the southern province, whose ethnic Albanian population wants independence. Serbia 's government in Belgrade is staunchly opposed to independence for Kosovo. On Monday, conservative Prime Minister Vojislav Kostunica warned that granting it would lead to a spiral of violence in the Balkans. 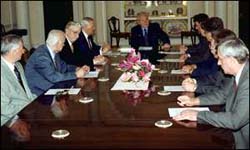 Martti Ahtisaari, the former Finnish president appointed by the U.N. to lead negotiations on Kosovo's future, met with Kostunica as a follow-up to the first round of internationally sponsored talks, held Feb. 20-21 in Vienna , Austria . The first, inconclusive round merely touched upon a series of issues that need to be resolved before deciding on a future status of the province.

Kosovo has been an international protectorate since 1999, when NATO bombing ended a Serb crackdown on Kosovo's ethnic Albanian separatists. The U.N. envoy is to meet later with pro-Western President Boris Tadic, who also vows never to sign any document agreeing to secession of the province, which Serbs cherish as their historic heartland.

Kosovo's present population, however, is overwhelmingly ethnic Albanian, and its Serb minority has sharply declined since the change of authority in 1999. The so-called Contact Group, the United States , Britain , Germany , Russia , France and Italy , sponsored the meetings in Vienna , which are expected to resume March 17.

Serbian officials have proposed a broad autonomy for Kosovo but not outright independence. Kosovo Albanians say they would settle for nothing less than a complete secession. After Belgrade , Ahtisaari is expected to meet with ethnic Albanian officials in Kosovo's capital, Pristina, reports the AP.