Democracy in Southeast Asia is taking a beating as mass demonstrations fail to dislodge an authoritarian leader in Thailand and the Philippines reels under a state of emergency allowing arrests without warrants and military intervention. Across the region, the health of democracy ranges from fragile to abysmal, with one once-unlikely exception, Indonesia . The world's largest Muslim nation, which is still emerging from three decades of dictatorship, is making significant progress toward rule of law, press freedom and transparency. 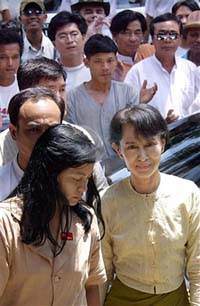 "The problem in some cases is the abuse of weak democracies, the exploitation by leaders of those parts of the system which aren't really democratic or strong," said Robert Broadfoot, of the Hong Kong-based Political and Economic Risk Consultancy. Although the tide against him appears to be rising, Thailand 's Prime Minister Thaksin Shinawatra has managed to survive mass protests demanding his ouster for alleged corruption, abuse of power and gutting democratic institutions.

Moving into uncharted political waters, opposition parties this week declared they would boycott a snap election Thaksin called for April 2 in a gambit to defuse the crisis. Such boycotts are unprecedented in Thailand and how Thaksin, a tycoon-turned politician with a majority in Parliament, will maneuver is uncertain. In the Philippines , a campaign to destabilize President Gloria Arroyo has frayed democracy's fabric as she cracks down on opponents suspected of plotting her overthrow.

Arroyo declared a state of emergency Friday to quash an alleged coup plot by the political opposition, elements within the military and others. Amid a suspension of some civil liberties and street demonstrations, capital charges have been filed against 16 people suspected in the plot.

Ironically, the "people power" which ousted dictator Ferdinand Marcos exactly 20 years ago has become a destabilizing political tool of the opposition, which waits for the president to stumble then tries to rouse the masses to get out and protest. This in turn, appears to drive the government to curb freedoms. "In Thailand , Thaksin used his mandate as a democratic leader to undermine institutions needed to have checks and balances. Is the Philippines a real democracy or just an elitist group going through the motions of democracy?" said Broadfoot.

Southeast Asia doesn't rate high on the global democracy charts. It includes two of the world's five communist states, Vietnam and Laos ; one of its longest-running military dictatorships, Myanmar ; two countries where a single party has ruled for decades, Singapore and Malaysia .

Laos , Vietnam and Myanmar rank among the bottom dozen in a survey of press freedom in 167 nations by the French non-government group Reporters without Borders. Indonesia rates high among Southeast Asian countries. Once enjoying among the freest presses in Asia , Thailand 's media has been severely curbed under Thaksin, who won the last elections in 2005 by a landslide. In the Philippines , more journalists have been killed since 2000 than in any other country in the world, including Iraq , the US-based Committee to Protect Journalists said last year.

Analysts cite a number of reasons for democracy's rocky road, including deeply-rooted patronage systems that favor leaders rather than ideals, along with corruption and cronyism. In countries like Thailand , Cambodia and the Philippines , personal loyalties influence affairs of state and massive vote buying sways election results.

"Cursed is this Kingdom and its people who pretend to be naive and think that elections in this country are or ever could be free and fair," said an editorial in Thailand 's The Nation newspaper this week.

Rather than Western democratic models, Southeast Asian leaders have looked to China and Singapore , which deliver economic benefits but exercise tight political control over the population. In recent times, the U.S. focus on fighting terrorism rather than vigorously promoting human rights and transparent governance, may also have slowed progress.

If Southeast Asian leaders "are cornered and questioned they say, `You're doing the same things you allege we're doing and criticizing us for it. Get off our backs,"' said James Klein, who heads the Asia Foundation offices in Thailand and Laos .

One-party rule in Vietnam and Laos is unlikely to change when the ruling communists of both countries hold congresses this year. Singapore 's ruling People's Action Party is almost certain to again trounce the small, fragmented opposition at parliamentary elections expected this year. The government says Western-style democracy and unfettered political debate could disrupt public order and undermine economic growth.

Myanmar's military, which has ruled for 44 years and defied international demands to release pro-democracy leader Aung San Suu Kyi from house arrest, shows no signs of relaxing its grip on power despite assertions it's following a roadmap to democracy, reports the AP.