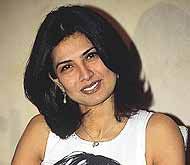 "Firefly - A fairytale" is based on Beri's personal experiences with one chapter set in Paris, where she earned international acclaim in the fashion world seven years ago.

"I have invested my hard-earned money in it after a prominent publisher opted out," Beri told The Pioneer newspaper, explaining the book's high price.

She promised to reprint it at a more affordable cost if the first 100 copies sell out.

"This is not my autobiography. It just talks about my journey until now," the Hindustan Times quoted Beri as saying.

Beri captured the limelight after she made her Paris couture debut with Western ready-to-wear designs, reports the AP.