China to spend near 15 billion euros on airport infrastructure 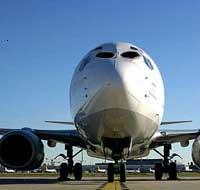 China to spend near 15 billion euros on airport infrastructure

That is sharply higher than the 120 billion yuan (US$14.9 billion; euro12.6 billion) the government spent on airport infrastructure in the fifteen years from 1990 to 2005.

"By 2010, the mainland will have about 186 airports, up from 142 currently," said Gao Hongfeng, vice-minister of the Civil Aviation Administration of China, or CAAC. Several existing airports will also be expanded to ease the pressure on capacity from rising traffic, he said at an aviation conference in Hong Kong.

The government will continue to expand the country's three largest airports _ Beijing , Shanghai and Guangzhou to help them maintain their role as China 's main international air transport hubs for passengers and cargo, he said.

Other airports slated for expansion include those in Shenzhen, Chengdu, Haikou, and Xian, he said.

The CAAC said it expects passenger and cargo traffic to grow at an average of 14 percent a year until 2010, with growth then slowing to 11 percent annually in the period 2011-2020, reports the AP.