A second victim died after a man opened fire during a Sunday church service, sending frightened parishioners ducking under the pews for safety. The gunman later killed himself. 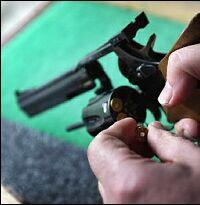 Alarie Davis, 54, who died Monday, had been shot in an arm and the chest while defending his wife during a carjacking attempt by the gunman several blocks from the church, police said.

The shooting inside Zion Hope Missionary Baptist Church killed a woman and wounded a girl sitting next to her. The violence grew out of a domestic dispute, said police Second Deputy Chief James Tate.

The gunman was identified as 22-year-old Kevin L. Collins, who reportedly went to the church looking for Jamika Williams, 19, who a family member said had refused to marry him.

The young woman's aunt, Connie Minter, told The Detroit News that Collins and Williams had a 10-month-old daughter. Minter said Collins began shouting after the girl's mother refused to tell him where to find her daughter.

The mother, Rosieta Williams, 37, was killed and a 9-year-old girl was hit in the hand by a buckshot pellet, police said.

About 5 1/2 hours later, Tate said officers spotted Collins walking about a mile from the church and saw him run behind a home. "An officer then heard a loud boom," Tate said. Collins died of what appeared to be a self-inflicted gunshot wound.

The pastor and church members continued with the service despite the shooting. The Rev. Curtis Grant asked people to pray for those involved in the shooting.

"The sanctity of our sanctuary has been disturbed," he said. "We're just trying to get the families and children through this tragedy", reports the AP.