Australian Olympic medal-winning cyclist Gary Neiwand was jailed for four months Tuesday for breaching a court order requiring him to stay away from his ex-wife. 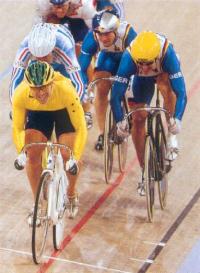 The Melbourne Magistrates Court heard Neiwand violated an order to stay at least 200 meters (656 feet) from his ex-wife and her home weeks after receiving a four-month suspended sentence for similar breaches in September.

Magistrate Felicity Broughton ordered Neiwand, who pleaded guilty to two counts of breaching an intervention order and one count of breaching a suspended sentence, to serve the four-month term.

Police prosecutor Senior Constable Craig Zeheer said Neiwand had had his last chance and was thumbing his nose at the court.

Neiwand's lawyer, Martin Grinberg, said his client was driving between cafes, intending to meet friends, when he inadvertently passed his wife's house. Grinberg said he would appeal the sentence and seek bail.

In a victim impact statement, Neiwand's ex-wife Catherine appealed to the court not to impose a jail sentence, reports the AP.