The government is investigating complaints of fuel tanks being punctured by road debris on some models of Chrysler Pacifica sport utility vehicles, officials said Monday. 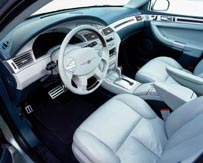 The investigation follows a recall in January of about 209,000 Nissan Murano vehicles from the 2003-2006 model years to install protectors in front of the fuel tank to prevent puncturing from road debris.

DaimlerChrysler spokesman Max Gates said the company was reviewing its data and working with the government on the investigation.

In a separate action, NHTSA said it was reviewing a 2003 recall of some models of the Nissan Altima because of problems with an engine sensor that could lead to stalling or could prevent the vehicles from starting.

The 2003 recall involved 2002 Altimas and a limited number of 2003 models. The government said it has recently received 29 complaints of similar problems from owners of 2003 Altimas that weren't initially included in recall.

Nissan said in a statement that it would fully cooperate with NHTSA in the investigation, reports AP.