Saddam's lawyers to attend trial for first time in weeks

Lawyers representing Saddam Hussein plan to attend this week's session of his trial, a month after storming out of court and accusing the chief judge bias toward the former Iraqi leader, one of the lawyers said Monday. 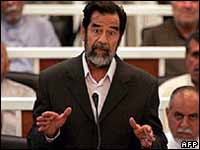 Saddam's lawyers to attend trial for first time in weeks

Only the eight Iraqi attorneys will attend Tuesday's session, Khamis al-Obeidi said. The five foreign lawyers defending the former president and members of his regime were unable to return to Baghdad in time for the Tuesday hearing because of a curfew imposed to curb violence after the bombing of a Shiite shrine last week.

"They will attend the following sessions," al-Obeidi said in a telephone interview.

But in Switzerland, two foreign members of Saddam's defense team said Monday they were unsure when they might again be allowed to visit the former Iraqi president and charged that the court trying Saddam and the others had barred them from meeting with their clients.

On Sunday, Saddam's chief lawyer Khalil al-Dulaimi met him in Baghdad for the first time in weeks and found him "in good health and high morale as usual," said al-Obeidi, who said he had been unable to visit the former Iraqi leader in recent days because of the curfew.

The defense team had sought but failed to win a delay in the Tuesday session, citing recent violence that has killed more than 200 people dead and attacks against mosques, mainly those of Sunni Muslims.

The attacks on the places of worship were launched in revenge for the bombing that destroyed the golden dome of a major Shiite holy shrine in the central city of Samarra.

Al-Obeidi said that if there is going to be a delay, it will be announced at the beginning of Tuesday's session.

"The is a positive step because it strengthens the ability of the defense to be effective," Nehal Bhuta said, reports AP.