Romania 's president Traian Basescu said Monday that he supported granting the Kosovo province autonomy and opposed any changes to borders in the region. "The borders of countries must not be changed," Basescu said during a meeting with his Macedonian counterpart Branko Crvenkovski, who was on a one-day visit to Bucharest . Basescu added that instead, Kosovo should be offered a "negotiated autonomy in accordance with European Union standards." 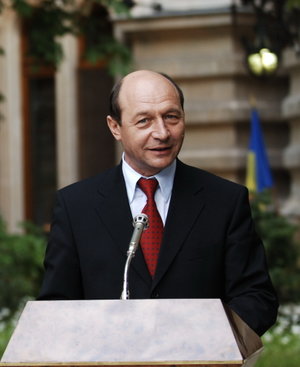 The two presidents also discussed their countries' efforts to join the EU, with Basescu saying that the bloc should make the Western Balkans a top priority for enlargement because it would help improve regional security. Crvenkovski asked Romania to share its experience in joining NATO and the EU with Macedonia , as the Balkan country is also seeking membership in these organizations.

Romania joined NATO in 2004 and is scheduled to join the EU in 2007. Also Monday, Macedonia joined the Central European Free Trade Agreement (CEFTA), an organization created in 1993 to liberalize trade among central and eastern European countries and to prepare them for EU entry.

In May, five of its members, Poland, Hungary, the Czech Republic, Slovakia and Slovenia, joined the EU and left the regional free trade agreement. "CEFTA will prepare countries like Macedonia to consolidate their economies before joining the EU," said Prime Minister Calin Popescu Tariceanu after meeting Crvenkovski, reports the AP.