Negotiations over a landmark nuclear deal with the United States are at a delicate stage, India 's prime minister told lawmakers Monday, promising skeptical communist partners and Hindu nationalist opponents that he would not compromise national security. Prime Minister Manmohan Singh also said that the country's fast-breeder program, which has become a particularly contentious issue in the discussions, would not be included in inspections by the International Atomic Energy Agency. 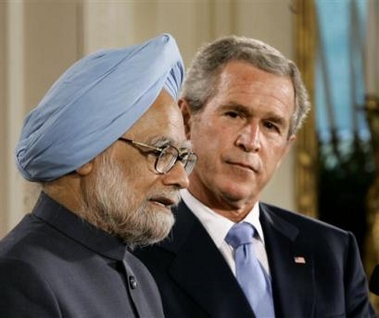 If finalized, the pact would allow the United States to provide nuclear technology and fuel that India needs to meet the energy needs of its booming economy. In return, India has pledged to separate its programs and open the civilian ones to IAEA inspections. A framework for an agreement was announced by Singh and U.S. President George W. Bush at the White House in July, and both sides had hoped to have it completed before the American president arrives in India on Wednesday.

"I had emphasized then and I reiterate today that no part of this process would affect or compromise our strategic program," Singh said in a speech in Parliament's upper house. "We will ensure that no impediments are put in the way of our research and development activities." The pact would provide New Delhi with much-needed uranium even as it develops technology to use another radioactive material, thorium, instead of uranium, in its nuclear plants. India has the world's largest thorium deposits.

For Washington , the nuclear pact is a major diplomatic U-turn since 1998, when New Delhi carried out multiple nuclear tests that led to economic sanctions from several countries. India later vowed to never use nuclear weapons unless attacked. In the years since, India 's swiftly globalizing economy has soared at some of the world's fastest rates, led by an information technology boom. With international oil prices rising, India is now looking to other sources, including nuclear power, to support the swift economic growth.

Talks to finalize the deal have been held up over which of India 's nuclear facilities would be designated as civilian and which would be considered military. "Negotiations are currently at a delicate stage ... There are complex issues involved," Singh said. "In our dialogue with our interlocutors, we have judged every proposal made by the U.S. side on merits, but we remain firm in that the decision of what facilities may be identified as civilian will be made by India alone, and not by anyone else."

Separating India 's tightly entwined civilian and military nuclear programs is key to the deal because the United States has only agreed to recognize India as having a civilian nuclear program, not as a legitimate nuclear weapons state. However, Singh said that in the July agreement, "the United States implicitly acknowledged the existence of our nuclear weapons program."

Further, the deal could give India all the benefits enjoyed by signatories to the Nuclear Nonproliferation Treaty, although New Delhi , which calls the pact discriminatory, is not a signatory. "The tremendous achievements of our scientists in mastering the complete nuclear fuel cycle, the product of their genius and perseverance, will not be frittered away," he said. "We have made it clear that we cannot accept safeguards on our indigenous fast-breeder program."

A fast-breeder reactor produces plutonium, which can be used for producing energy or nuclear weapons. The nuclear deal is also seen as an attempt by the United States to wean away India from its other major energy pursuit, a trans-Asian pipeline project with Iran that Washington has publicly opposed, reports the AP.