No food, no water in Afghan prison

Authorities said they resumed supplies of food and water to inmates, including women and children, at Afghanistan 's main jail Monday after about 2,000 prisoners agreed to temporarily halt two days of rioting. Officials said they were optimistic of a breakthrough in negotiations with the prisoners. At least four inmates have been killed and 38 wounded in the uprising, blamed on some 350 Taliban and al-Qaida detainees. 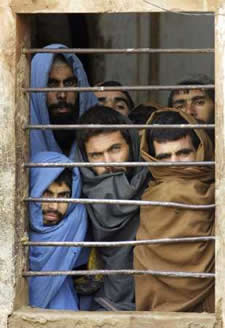 No food, no water in Afghan prison

"The food, water and electricity has been restored. For the time being, I am optimistic. Everything is quiet. Let's see what happens tomorrow," said Abdul Salaam Bakshi, chief of prisons in Afghanistan . Supplies were cut late Sunday as hundreds of police and soldiers circled the sprawling Policharki jail on the outskirts of the Afghan capital, Kabul , in tanks and with other heavy weapons.

Gunfire rang out from inside the facility until late Monday when news broke of progress in the talks. Within hours, truckloads of police withdrew. Many remaining soldiers lounged on the ground, sipping tea and smoking cigarettes as the tension eased.

Sibghatullah Mujaddedi, the chief government negotiator, said the prisoners told him that "they would not launch any more attacks right now." He declined to elaborate. "I promised them I would do my best to solve their problems and they trust me," he told reporters outside the prison.

Mujaddedi said the negotiators reached an agreement with the prisoners for the wounded inmates to be taken to hospital, but it was not clear when this would happen. He also said prison authorities were asked to help bury the dead inmates, but did not elaborate further.

During the talks, the prisoners made a range of demands, including a general amnesty for an unspecified number of inmates, Mujaddedi said. A purported spokesman for the prisoners called The Associated Press and demanded new trials for the inmates, claiming many were innocent or their sentences were too long.

"Two-thirds of the prisoners here are innocent. The courts were unfair," said the man, who identified himself only by the name Maqsodi and said he was calling from inside one of the seized prison blocks. It was not possible immediately to confirm the man's identity.

Feruza Kahiastani, a member of the Afghan Independent Human Rights Commission, told AP after meeting the prisoners that she was also optimistic of a breakthrough, but warned "it could take a long time." Bakshi said no deadline had been set for a deal to be reached.

Mohammed Qasim Hashimzai, the deputy justice minister, said before Monday's negotiations started that he wanted to end the standoff peacefully, but warned that the government could use force. "We can take all these prisoners in one hour," he said. "But to prevent bloodshed we are trying to negotiate."

The prisoners are believed armed with small knives and clubs fashioned from wrecked furniture, but do not have guns. Kahiastani said reports that some of the 70 female inmates had been kidnapped was wrong. She said a number of women prisoners had willingly joined their male counterparts, but later returned to their own prison block, reports the AP.