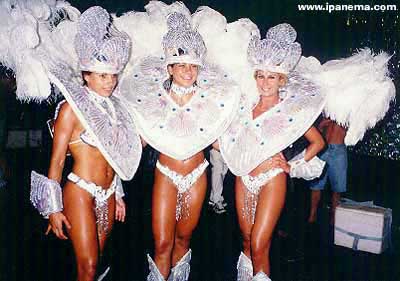 The samba group Salgueiro kicked off the parade under hail of fireworks Sunday night and three time champions Beija Flor closed the first day of parading in bright the morning sun, just before 8:00 a.m. ( 6:00 p.m. EST ). Salgueiro brought 3,800 dancers to the Sambadrome stadium and serenaded a crowd of some 70,000 with a number called, "Microcosm: What the Eye Doesn't See, the Heart Feels."

There was plenty for the eye to see: enormous, opulent floats draped with scantily clad dancers, and below them legions of dancers dressed in costumes as elaborate as small parade floats. There was also plenty for the heart to feel: the merciless thudding of a 300-piece drum corps.

"It's madness. There's so much color, dancing and music," said Des Ryan, a 48-year-old stonemason from Ireland who was experiencing Rio 's world-famous Carnival for the first time. Also on hand to watch the festivities was Argentine soccer star Diego Maradona.

Over two nights, 14 of the city's top-tier samba groups will present 80-minute parades costing some US$2 million (1.6 million) each in the hopes of wowing the crowd and the judges, and being declared champion, a distinction that brings little more than bragging rights.

Reigning champion Beija Flor, which is vying for its fourth straight title and judging from the crowd's enthusiasm Beija Flor has another shot at title. Victory would make it the first group with four consecutive wins since the parade was moved into the specially-designed Sambadrome stadium in 1984.

The Portela school, which will close out the parade early Tuesday morning, was declared champion seven times in a row between 1941-47 and holds the record for most championships with 21, but they have never won the championship in the Sambadrome.

While Brazil 's 185 million people celebrate Carnival in different ways, the samba parade is broadcast live nationwide and the groups inspire the kind of passions normally reserved for the country's soccer teams. In a poll published Sunday in the Rio de Janeiro newspaper O Globo, 37 percent of those surveyed said the best way to celebrate Carnival was to watch the parade on television. The next-largest group, 16 percent, said it was best celebrated by leaving town.

Another popular option is to flock to the streets, where informal samba groups draw large crowds and snarl city traffic. "It was amazing the way the band starts playing and everyone just joins in," said Ralph Poetsch, a 48-year-old businessman from Orlando , Florida . "There were so many people, it was like a wave."

Carnival celebrations capped a week where Brazilians were treated to nationally televised concerts, first by the Rolling Stones, which brought more than a million people to Copacabana beach, and then by U2, which played for two nights in Sao Paulo 's Morumbi soccer stadium

Following the U2 show, the band headed to Salvador , a coastal city some 1,200 kilometers (750 miles) northeast of Rio , where front man Bono performed an impromptu duet with Carnival singer Ivete Sangalo. The visit inspired dozens of bands, which ply the city atop sound trucks, to crank out samba-fied versions of U2 tunes long after the Irish rockers had left, reports the AP.