Hamas leader Khaled Mashaal discussed efforts Monday to form a Palestinian government with Syrian Foreign Minister Walid Moallem. Mashaal told reporters after the meeting that he met with Moallem for "consultations on political issues," and Syria 's supports for the Palestinians. 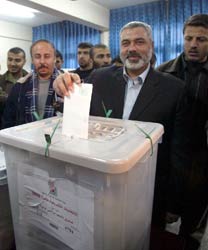 "We are in continuous consultations and this visit is in this context," Mashaal said. Commenting on efforts to form a Palestinian government, Mashaal said Hamas was in the "consultation stage" with various Palestinian factions and personalities, but added that the matter "will be concluded soon."

Syria 's official SANA news agency said both men stressed the importance of enhancing Palestinian national unity in order to form a Palestinian state. The militant group's designated prime minister, Ismail Haniyeh, has been trying to form a Palestinian government. The EU and the United States have called on the group to recognize Israel , renounce violence and back peace efforts with Israel if it wants its new government to receive aid, reports the AP.