Germany 's foreign minister visits Ukraine on Tuesday, just weeks before parliamentary elections that will determine whether this former Soviet republic pursues its Western path. Frank-Walter Steinmeier meets with President Viktor Yushchenko, Prime Minister Yuriy Yekhanurov and Foreign Minister Borys Tarasyuk, the Foreign Ministry said Monday. The talks are expected to focus on the political situation in Ukraine before the March 26 vote and on the country's European aspirations. 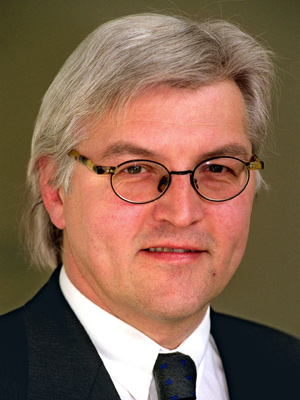 Steinmeier will also deliver a speech on Ukraine 's relations with Germany and the European Union at a Kiev university. The elections are seen as a crucial test for Yushchenko as he seeks to obtain enough support in parliament to pursue his goal of Ukraine joining the European Union and NATO. But the party of his pro-Russian rival, Viktor Yanukovych, is leading in opinion polls.

Under recent constitutional reforms that weaken the presidency, the parliament will assume some of the powers held by the president, including the right to name the prime minister and some Cabinet ministers. Yushchenko, an opposition leader, came to power after mass protests over election fraud that became known as the Orange Revolution. He won a court-ordered repeat vote in December 2004 after the Kremlin-backed victory by Yanukovych was annulled because of massive vote-rigging.

After taking office last January, Yushchenko promised to nudge this nation of 47 million closer to Europe and shake off Russian influence. But the hopes of many Ukrainians have given way to disillusionment because of his failure to make rapid progress in tackling poverty and corruption.

Ukraine 's economic growth plummeted from 12.1 percent in 2004 to 2.4 percent last year, and business leaders widely condemned the government's efforts to challenge past privatization deals and manage prices. The president's position has also been weakened by a January vote in parliament to sack his government, which Yushchenko has refused to recognize, over a controversial deal that ended a gas price dispute with Russia . The agreement almost doubled the price of gas imported by Ukraine , reports the AP.