Thailand 's opposition parties announced Monday they will boycott April 2 elections because Prime Minister Thaksin Shinawatra has refused to accept their proposals for political reform, heightening the country's political crisis. The announcement by the Democrat, Chart Thai and Mahachon parties came after Thaksin agreed to hold talks with them, but not to accept their proposals. The opposition plan was not publicly announced, but reportedly called for Thaksin to step down from office until the elections are held. 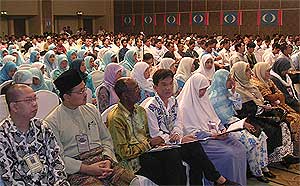 Thaksin said the election would still be held April 2, regardless of any boycott. The moves by both sides intensified a political crisis triggered by a growing mass movement demanding that Thaksin step down because of alleged corruption and abuse of power.

In an effort to head off the growing campaign against him, Thaksin dissolved Parliament on Friday, forcing national elections three years early. His party is widely expected to win because of its massive financial resources and control over the government. "Once the opposition parties decide that they will not join the election, many more problems will arise for the government, and there might not even be an election on April 2," said Sukhum Nuansakul, a political lecturer at Ramkhamhaeng University .

Democrat Party head Abhisit Vejjajiva, with the leaders of the two other parties at his side, said the lack of a positive response from Thaksin to their reform proposals "means the government is not sincere about political reforms." The parties also decided not to attend a planned meeting with Thaksin later Monday after he publicly rejected their proposals in advance.

Abhisit blamed Thaksin for the worsening situation. "We are boycotting the elections. We're not taking part in a process which has no guarantee for the people about political reforms," Abhisit said. "There is no way out of the crisis unless the prime minister accepts that the key part of the problem is his own legitimacy."

Thaksin, responding to the opposition action, said his Thai Rak Thai Party "has done its best." "What the opposition parties do is up to them," he told reporters.

On Sunday, tens of thousands of protesters demanded Thaksin's resignation during a rally at a large field near the old royal palace in Bangkok , where thousands camped out overnight, and rallied again Monday night, but in much smaller numbers.

They chanted "Thaksin Get Out!" in response to various speakers denouncing the prime minister. The organizers, the People's Alliance for Democracy, have said the protests will "continue until Prime Minister Thaksin is out." The alliance, an ad-hoc coalition of activists, labor and student groups, has led protests in recent weeks.

The parliamentary opposition parties have lagged behind the street protesters, and mounted their challenge only after Thaksin called the snap elections. Many of Thaksin's opponents believe that constitutional reforms are needed to loosen the ruling party's stranglehold on power. Thaksin, while willing to consult with the opposition, said he would not sign a proposal they planned to submit to him, instead offering a longer-term constitutional reform plan.

Thaksin, one of the country's richest men, won a second term as prime minister a year ago with a landslide election victory for his party, which took 377 of the 500 seats in the House of Representatives. In addition to allegations of corruption, he has also come under fire for mishandling a Muslim insurgency in southern Thailand , stifling the press and allowing business and political cronies to reap enormous gains from state policies, reports the AP.