Two authors of a book about the Holy Grail opened a breach of copyright suit Monday in Britain 's High Court against the publisher of Dan Brown's blockbuster conspiracy thriller "The Da Vinci Code." Michael Baigent and Richard Leigh, authors of the 1982 book "The Holy Blood and the Holy Grail," claim that "The Da Vinci Code" author appropriated their ideas and themes. 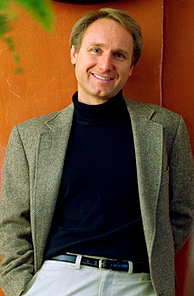 If the two writers succeed in getting an injunction barring use of their material, it could threaten the scheduled May 19 release of the "Da Vinci Code" film starring Tom Hanks and Ian McKellan.

Both books hinge on the theory that Jesus married Mary Magdalene, that they had a child and that the blood line survives. The earlier book set out the notion that Christ did not die on the cross, but lived later in France .

Brown, who was expected to testify next week, told reporters outside court that this idea had no appeal for him. "Suggesting a married Jesus is one thing, but questioning the Resurrection undermines the very heart of Christian belief," said Brown, who described himself as a committed Christian.

Jonathan Rayner James, a lawyer for Baigent and Leigh, said the case did not relate to theft of specific parts of text but to the alleged appropriation of themes and ideas. "Brown copied from 'The Holy Blood and the Holy Grail' and therefore the publication of the resulting novel is an infringement of my clients' copyright," he told the court.

James said that his case did not attempt "stultify creative endeavor," or to claim a monopoly on ideas or historical debate. Jonathan Baldwin, representing Random House, said the two authors were making "wild allegations."

He said they were suggesting that "Mr. Brown has appropriated not only the numerous parts of a jigsaw puzzle but the organizational way (Baigent and Leigh) put it together." Baldwin said Brown referred to "The Holy Blood and the Holy Grail" in his novel, but the earlier book "did not have anything like the importance to Mr. Brown which the claimants contend it had."

The case is being heard in the Royal Courts of Justice on The Strand, a short walk from the Temple Church , which figures in Brown's book. The church, founded by the Knights Templar, has reported an increase in visitor traffic inspired by "The Da Vinci Code."

While some Christian leaders have condemned the book, the master of the Temple , Robin Griffith-Jones, takes it in stride. "It is a great pleasure both to welcome to the Temple Church the many visitors attracted here by the book and to hear the questions to which it has given rise," Griffith-Jones said last year. "So much the better, if we can help answer some of these questions", reports the AP.