The White House expressed doubts Monday the deal between Russia and Iran to establish a joint uranium enrichment venture on Russian territory would meet the concerns of the United States and other countries' concerns about Iran 's nuclear ambitions. 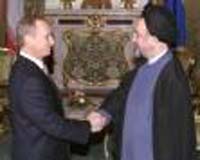 Officials noted news reports that quoted an Iranian official as saying Tehran intends to continue uranium enrichment on its own soil as well. The United States has supported Russian efforts to get all enrichment activities to take place outside of Iran and all spent fuel to be returned to Russia .

"We'll have to see what the details of any agreement are," White House spokesman Scott McClellan said. "Given their history, you can understand why we remain skeptical." The nuclear chiefs of Russia and Iran announced at a Tehran news conference Sunday that they had agreed in principle to a plan to establish a joint uranium enrichment venture on Russian territory, a development that could mark a breakthrough in efforts to calm fears about Iran 's nuclear program.

Russia said talks with Iran had not ended and would continue until the International Atomic Energy Agency board of governors' meeting on Iran next week. That meeting could start a process leading to punishment by the U.N. Security Council, which has the authority to impose sanctions on Iran , reports the AP.