Sweden and Belgium joined France and Germany in saying Monday they are ready to send troops to boost the embattled U.N. peacekeeping mission in Congo before the country's presidential election in June, officials said Monday. Spain and Portugal also expressed an interest in participating in a European Union contingent at an EU foreign ministers meeting, officials said. 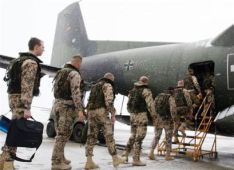 The issue is to be discussed in detail by EU defense ministers at a meeting in Austria next week. Authorities in Kinshasa set June 18 as the provisional date for long-awaited and repeatedly delayed presidential elections a ballot that will be the first in decades for the Central African nation. The EU foreign ministers said in a statement the "forthcoming electoral process will be a key step" in Congo 's democratic process and welcomed the recent promulgation of the new Constitution and the adoption of an electoral law.

It urged Congo's transitional government created in 2003 after peace deals that ended the nation's devastating 1998-2002 war and "political parties, their leaders and civil society to work together to ensure peaceful, fair and transparent elections (to secure their nation's) future as a democratic and stable country."

The EU is considering a United Nations request for troops to boost the embattled U.N. peacekeeping force in Congo . A deployment to Congo would mark the first use of EU "battle groups" that were created last year to provide mobile units of around 1,500 troops for international hotspots. The U.N.'s 16,000 peacekeepers in Congo have frequently come under fire in he country's restive east. In 2003, the EU sent a mainly French force of 1,850-strong to pacify the northeast city of Bunia to prepare for the arrival of a larger U.N. force in the first such operation by the European bloc, reports the AP, reports the AP.