Iranian Foreign Minister Manouchehr Mottaki told his Japanese counterpart on onday that Iran has the right to pursue nuclear research and will not stop despite international criticism, a Japanese Foreign Ministry official said. 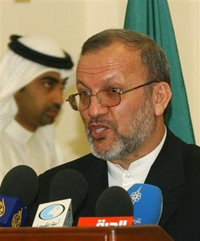 A Japanese Foreign Ministry official, briefing reporters on condition of anonymity, said that Mottaki said his country would not abandon its nuclear program. It was not immediately clear if Mottaki was referring specifically to the enrichment activities.

"What we are doing is research at the laboratory level and it is impossible for us to stop it and that's Iran 's right," the official quoted Mottaki as saying.

Motttaki's visit came after Iran and Russia agreed on Sunday in principle to establish a joint uranium enrichment venture a breakthrough in talks on a U.S.-backed Kremlin proposal designed to ease international concerns over Tehran 's nuclear ambitions.

But it was not known whether Iran will entirely give up enrichment at home a top demand of the West.

Mottaki said Monday that Iran is working hard toward making compromises with Russia , adding that the two countries are negotiating details about how to proceed with the joint venture including the location, the length of the venture, and Iran 's involvement.

The United States and other Western governments suspect that Iran 's nuclear research program is a cover for weapons development. But Tehran insists it only wants to develop technology to generate energy.

Japan , which relies on Iran for much of its oil imports, has been keen to play a role in resolving the standoff. Tokyo also has a special link with Mottaki, who served as ambassador to Japan from 1994 to 1999.

Earlier this month, the IAEA board of governors voted to report Iran to the U.N. Security Council. But it did not ask the council to take any immediate action, putting off any possible move for economic sanctions.

The developments have alarmed Tokyo, which has a US$2 billion (1.7 billion euros) deal to develop Iran's Azadegan oil field believed to be one of the largest in the Middle East, with reserves of up to 26 billion barrels.

Japan penned the deal in 2004 despite opposition from the U.S. government, which feared the money might be used for nuclear proliferation, reports the AP.