Canada 's governor-general, Michaelle Jean, met Monday with Pope Benedict XVI during a Vatican audience that also included her 6-year-old daughter. The Haitian-born Jean, who holds the largely ceremonial post of Canada 's head of state, spoke French as well as Italian to the pope during their 25-minute private meeting in Benedict's private library. Jean studied Italian in Montreal and in Italy . 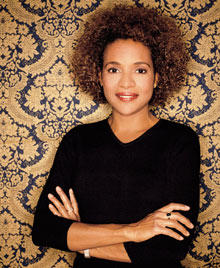 As they sat down, Jean told the pope she had heard he spoke 10 languages. "Maybe three," he replied. Jean's husband, the French-born Quebec filmmaker Jean-Daniel Lafond, escorted their daughter, Marie-Eden, into the room and she shook hands with the pope. They later posed for a photo together, with the pope resting his hands on the little girl's shoulders.

Jean, who is Queen Elizabeth II's representative in Canada , presented Benedict with an Inuit carving of a bear, "testimony of Inuit culture," she said. The pope gave her a papal medal.

Jean, a refugee from Haiti , was sworn in as governor-general in September, the first black person and third woman to hold the title. Her job is to defend Canada 's sovereignty and promote its national identity, reports the AP.