Spanish police arrested the alleged killer of a Yugoslav human rights leader who had papers on him incriminating former Yugoslav President Slobodan Milosevic in dozens of murders when he was gunned down in 1990, authorities said Monday. 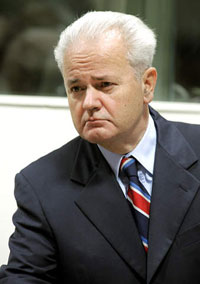 Veselin Vukotic was arrested over the weekend at Madrid 's Barajas airport as he got off a flight from Paris , a police statement said. It said he is believed to have been living in Spain 's northeastern city of Barcelona with his wife and daughters under various aliases.

Vukotic could be a witness in the genocide trial against Milosevic, which is taking place at the U.N. war crimes tribunal in The Hague , Netherlands , police said.

The human rights leader, Enver Hadri, was shot in the head allegedly by Vukotic and two other men while he was stopped at a traffic light in Brussels , Belgium , on Feb. 25, 1990 . All three gunmen were believed to be hitmen working for the the Yugoslav secret service, according to Kosovo Information Ministry of the time.

Hadri was an ethnic Albanian from Kosovo who have been advocating severing of the ties between Kosovo and Serbia since the late 1960s. He moved to Brussels around that time, and later started a political magazine through which he called for the unification of Albanian speaking areas in a single state in the Balkans.

Hadri was part of a large ethnic Albanian diaspora in Europe involved in a cat-and-mouse game with Yugoslav intellegence elements who wanted to preserve territorial integrity of the old federation.

Spanish police said the papers Hadri was carrying tied Milosevic to as many as 34 murders of prominent people, although the police gave no details and said they had no independent confirmation of his guilt.

"The detention of Vukotic could be an essential piece in the case against Miloesevic," the police said.

Vukotic is also wanted for the killing a month later of one of his alleged accomplices in the Hadri murder, identified in the police report as Andrija L. Two other people were gravely wounded in the attack on a Belgrade discotheque where Andrija L. was killed. The third Hadri shooter, identified as Darko A., was killed in 1995.

In 1997, Vukotic allegedly killed another man, this time in a disco in Montenegro .

Police say Vukotic had managed to avoid capture since 1990 through the use of a number of false identities, evading authorities in Europe and Latin America . He stayed at luxury hotels and was constantly on the move, but it is unclear how he financed the lifestyle.

When he was arrested at the Madrid airport, he was carrying a high-quality counterfeit Croat passport and driver's license in the name of Ludvig Bulic, but police had been tipped off to his arrival and were waiting for him.

Vukotic, wanted in both Belgium and the former Yugoslavia , was to be brought before Spain 's National Court in Madrid . The U.N. tribunal trying Milosevic has also "shown great interest" in his detention, the police said, reports the AP.