Gunmen opened fire with assault rifles on a passenger train in southwestern Pakistan, sparking a gunbattle with security forces, a railroad official said. There were no immediate reports of injury. 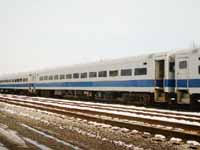 Bullets hit the train but did not hit any of the people inside as it passed through the mountainous area of Aab-e-Gom, about 80 kilometers (50 miles) southeast of Quetta, the capital of southwestern Baluchistan province, said Ghulam Rasool, traffic controller at the state-run Pakistan Railways.

Security forces deployed in the rugged area to protect the railway line returned fire and the gunbattle was continuing more than an hour later, he said.

The train, headed from Quetta to Lahore, the capital of eastern Punjab province,  was stopped at a railway station near the scene of the attack for authorities to assess damage, Rasool said.

Renegade tribesmen have been blamed for small-scale bombings on railroads and rocket attacks on security forces in Baluchistan, a vast and impoverished province.

Tribesmen are accused of launching the attacks to press demands for increase in royalty for resources, such as natural gas, extracted in their territories, reports the AP.