Ronaldinho will not play in Brazil's friendly against Russia because of an ankle injury, the Brazilian Soccer Confederation said Sunday. 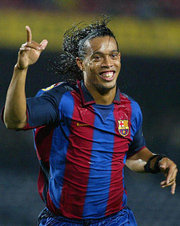 The midfielder requested to be dropped from next Wednesday's match in Moscow to treat the left ankle injury suffered last week in FC Barcelona's 2-1 victory over Chelsea in the Champions League.

Ronaldinho, winner of two consecutive FIFA World Player of the Year awards, started against Zaragoza on Saturday, but was forced to leave the match because of the injury.

"There's no reason to deny the request," Brazil coach Carlos Alberto Parreira told the Lance sports daily. "We know he already was doubtful to play against Zaragoza."

The Brazilian confederation said it was waiting a medical report from Barcelona to officially release the player.

The friendly against Russia will be Brazil's last match before Parreira names the final squad for the World Cup in Germany.

The five-time world champion will be without other four players who are likely to be in the final roster, defenders Cafu and Roque Junior and goalkeepers Dida and Julio Cesar, who are all injured, reports the AP.