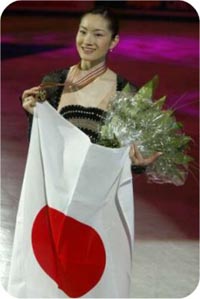 She was Japan 's last hope for a medal in the latest Winter Games. Arakawa's victory dominated Friday's morning news programs. "She was excellent! Ms. Arakawa not only won the first medal for Japan, and it's gold," said Tatsuya Misaka, an official in her home prefecture (state) of Miyagi, about 300 kilometers(190 miles) northeast of Tokyo. "We all got up very early this morning and watched the program."

The last Japanese to win a medal in figure skating was Midori Ito, one of Arakawa's idols, who won silver behind Kristi Yamaguchi in 1992. Prime Minister Junichiro Koizumi called Arakawa in Turin to congratulate her.

"Your performance was outstanding and it was a perfect score," Koizumi said. Chief Cabinet Secretary Shinzo Abe told reporters that "I was feeling a bit sad that Turin Olympics may end as it was standing, so I was extremely delighted... I am sure that those who woke up early this morning would feel it was very much worth the effort."

Arakawa's winning of her gold medal comes just as Japan was getting desperate for a medal amid disappointment after other medal hopefuls had failed to reach the top spots.

"I think it's a shame that no Japanese athletes have won any medals in this Olympics, so it's especially good news that this medal was a gold," said Satoshi Kawata, a 47-year-old company employee on his way to work. Team officials had predicted Japan would win five or more medals, surpassing the two it won in Salt Lake City in 2002, reports the AP.