Several hundred Muslims staged a peaceful demonstration Friday outside the Danish consulate in Melbourne in protest over cartoons of the Prophet Muhammad. 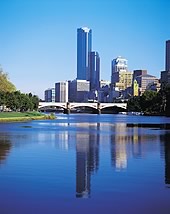 Organizers said they had called the protest to express solidarity with Islamic communities around the world offended by the cartoons, which first appeared in a Danish newspaper.

One of the caricatures depicted the prophet with a turban shaped like a bomb with a lit fuse.

"The prophet was portrayed as being a terrorist, so anyone who follows his teachings are terrorists as well," said protester Ali Dirani. "That's labeling all Muslims as terrorists around the world."

But he said the demonstrators also wished to thank the Australian media for not publishing the cartoons and stressed that "Islam is a peaceful religion."

Other newspapers, mostly in Europe, have reprinted the pictures, asserting their news value and the right to freedom of expression.

Islam is interpreted to forbid illustrations of the prophet for fear they could lead to idolatry, and violent protests around the world have left at least 45 people dead, reports the AP.