Death toll from violence in Iraq rises to 78

The death toll from violence sparked by the bombing of a Shia shrine in Samarra rose to at least 78 today, heightening fears that Iraq is sliding towards civil war. 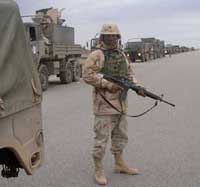 Death toll from violence in Iraq rises to 78

Police and military sources said most of the dead were Sunnis, killed in the 24 hours since the attack that destroyed the golden dome on the al-Askari shrine, one of Shia Islam's most revered sites.

Tony Blair joined Iraqi leaders in appealing for calm as the government in Baghdad cancelled all police and army leave and extended curfews in the capital and other cities in an attempt to prevent violence from spreading further.

"The very purpose of those who destroyed the shrine is to stop the will of the Iraqi people for the country to come together in a unity government," he said.

"Each time this happens our reaction is not to say let's walk away. Our response has to be we stand up and defeat these people."

Nearly 50 people were pulled from buses and shot dead in the Nahrawan area, south-east of Baghdad. Their bodies were later found behind a brick factory.

Sixteen people were killed, including eight civilians, and 21 injured when a bomb aimed at an army foot patrol exploded in a busy market in Baquba, north-east of Baghdad.

Earlier one person was killed and two injured when gunmen opened fire on a Sunni mosque in the town.

Iraqi police also reported finding some 50 bodies - many with bound hands - at sites around Baghdad, but it was not immediately clear if this figure included the 40 recovered in Nahrawan.

In Basra, which is predominantly Shia, men dressed in police uniform took 11 Sunni prisoners from a prison. They were later found dead at various sites in the of the city. Officials put the overall death toll in Basra at 25.

A well-known Iraqi journalist working for al-Arabiya television and two members of her crew were kidnapped and killed while reporting on the shrine attack in Samarra.

The bodies of Atwar Bahiat, 26 - a Sunni who had previously worked for al-Jazeera - and her cameraman Adnan Khairallah and soundman Khaled Mohsen, were found on the outskirts of town.

An official from the Dubai-based station said one of the crew managed to escape from the ambush and informed police.

Speaking during his monthly press conference in London, Mr Blair said al-Qaida was the most obvious suspect behind the Samarra bombing. He also called on Iraqis not to let the attack derail efforts to form a unity government.

His comments were echoed by the foreign secretary, Jack Straw.

"There is not yet information about what caused this terrorist outrage, but [Abu Musab] al-Zarqawi and al-Qaida have been linked as it has the hallmarks of their nihilism," Mr Straw said.

"From what I know of the Iraqi people, they have the will to work through this."

The US secretary of state, Condoleezza Rice - who is visiting the Middle East - echoed calls from George Bush for Iraqis to avoid descent into sectarian violence, reports Guardian Unlimited.