India waits for results of people suspected of having bird flu

Tests on people in western India suspected of having bird flu show no sign of the deadly H5N1 infection, an Indian official said Thursday, while authorities began setting up strict checkpoints around the town at the center of the country's first bird flu outbreak. 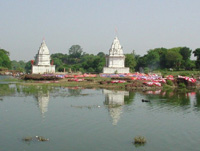 India waits for results of people suspected of having bird flu

No one will be allowed in or out of Navapur if they appear to be sick, a state official said.

The cordon will cover a 3-kilometer (1.8-mile) radius from the town, and police said senior officials in the state had ordered it as a precaution one day after workers finished culling hundreds of thousands of chickens to stop the spread of the deadly strain.

"It's restricted entry and exit so no new people will be allowed to enter Navapur, and people with any symptoms of fever and heavy cough and cold will not be allowed to leave Navapur," Bhushan Gagrani, a Maharashtra state official.

Nine people have been hospitalized in Navapur with flu-like symptoms.

Radakrishnan could not say if the samples were for 95 different people or multiple samples from the nine hospitalized.

The H5N1 strain of the bird flu virus has devastated poultry stocks and killed at least 92 people, mostly in Asia, since 2003, according to the World Health Organization. Most human cases of the disease have been linked to contact with infected birds. But scientists fear the virus could mutate into a form that is easily transmitted between humans, possibly sparking a pandemic, reports the AP.