A second case of the deadly H5N1 bird flu virus has been confirmed in a wild duck in France, Agriculture Ministry officials said Thursday. 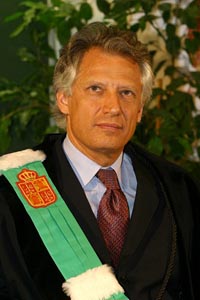 The duck was found dead on Feb. 19 in the Ain region in southeastern France, near the site where an infected duck was found last week, the Agriculture Ministry said.

The second duck was found in a lake in the village of Bouvent, some 35 kilometers (22 miles) from Joyeux where the first duck was discovered. The region is dotted with ponds and is home to Bresse chickens, famed for their succulent flesh.

Special surveillance measures were being put in place around Bouvent, the Agriculture Ministry statement said. Authorities were setting up protection zones of three and 10 kilometers (two and six miles) around the site. Among other measures, vehicles are to be checked to ensure that no poultry or other captive birds leave the region.

Last week, the government ordered all domestic birds indoors or, in a few regions, vaccinated in a bid to halt bird flu. Violators could face fines of up to Ђ 750 (US$895).

France is Europe's largest poultry producer and there were fears that a protracted bird flu crisis could devastate the industry. Poultry sales plunged by 25 to 30 percent since the first case of lethal bird flu was reported last week.

"No poultry farms have been affected," Prime Minister Dominique de Villepin said Thursday on the television station Canal Plus. However, he added that this was "a possibility" and that procedures were in place to deal with such an event, including killing the entire stock.

Villepin said aid would be provided for poultry farmers, reports the AP.