The new U.N. mission chief on Thursday appealed to militants "to leave Afghanistan's children alone," after a spate of attacks blamed on the Taliban targeted teachers and schools. 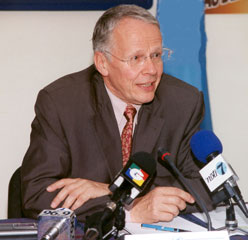 Tom Koenigs, the incoming U.N. special representative to Afghanistan, said the attacks amounted to a "denial of the human rights to education for Afghanistan's children."

"I can only appeal to those who apparently disagree with the development Afghanistan takes, 'Leave Afghanistan's children alone,"' he said in his first news conference.

Dozens of schools have been targeted by arsonists since U.S.-led forces ousted the Taliban in 2001, and hundreds more, particularly in volatile southern and eastern regions, are closed because of poor security.

Most of the attacks have come at night so children have not been injured, but some teachers have been targeted. In January, a headmaster of a coed high school was beheaded in southern Zabul province.

Koenigs, 62, who most recently worked as commissioner of human rights policy and humanitarian aid for the German government, said the security situation was one of the main obstacles to development in Afghanistan which is still recovering from a quarter century of conflict, reports the AP.