U.S. Secretary of State Condoleezza Rice made a surprise visit Thursday to Lebanon where tension has been rising over the campaign by anti-Syrian legislators to oust pro-Syrian President Emile Lahoud. 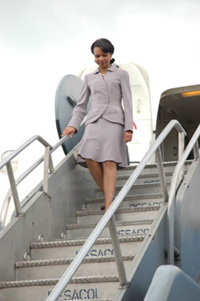 Rice was expected to lend support to the government of Prime Minister Fuad Saniora, which is dominated by anti-Syrian politicians.

Rice arrived at midmorning on the second day of her Middle East tour. She spent Wednesday in Egypt and Saudi Arabia, two key players in Arab attempts to mediate between Lebanon and Syria whose relations deteriorated severely after the assassination of former Lebanese Prime Minister Rafik Hariri last year.

Rice last visited Beirut on July 22. Hours later a bomb exploded on a street popular for its nightlife, wounding about a dozen people. Lebanon has been plagued by a series of bombings and attacks against anti-Syrian personalities in the last year.

Pro-Syrian groups were expected to protest against Rice's visit, while anti-Syrian factions planned to demonstrate against Lahoud during Thursday's Cabinet session which the president is expected to chair.

Lebanese officials made no immediate comment on Rice's visit, but troops were spotted on major highways and police removed parked vehicles from designated streets on her route, reports the AP.