Iran says it will finance a Palestinian Authority run by Hamas

Iran threw a new twist into the global wrangling over Hamas on Wednesday, offering to fund a Hamas-led Palestinian Authority if the West cuts off aid. 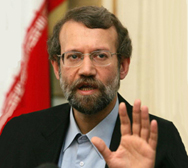 Iran says it will finance a Palestinian Authority run by Hamas

But Israel was to quick warn that it will do everything it legally can to block money from , and warned the Palestinians against aligning with what it called an international pariah.

Iran, one of Hamas' strongest backers, shares a nearly identical regional political strategy with the group that won last month's Palestinian elections by a landslide. Both have called for the destruction of Israel and neither recognizes the Jewish state.

Hamas, which grabbed a surprising parliamentary majority in last month's elections, has refused Western demands to renounce violence, accept Israel's right to exist and abide by past agreements between Israel and the Palestinian Authority.

The United States and European Union, which consider Hamas a terrorist group, have said they will halt their grants of hundreds of millions of dollars of aid to the Palestinian Authority after a Hamas government takes office unless it changes its attitude toward Israel and violence.

"The United States proved that it would not support democracy after it cut its aid to the Palestinian government after Hamas won the elections. We will certainly help the Palestinians," Larijani said, according to an Iran radio report.

In Jerusalem, Israeli Foreign Ministry spokesman Mark Regev said: "The incoming Palestinian leadership has to decide if it wants to be part of the legitimate international community or if it wants, through its own actions, to align itself with international pariahs", reports AP.