Pope Benedict XVI named 15 new cardinals Wednesday, including prelates from Hong Kong, Boston and Krakow, Poland, adding his first installment to the elite group of churchmen who will elect his successor. 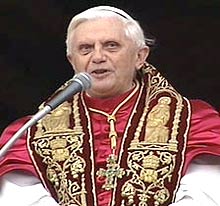 Benedict read aloud the names during his weekly general audience and said they would be elevated during a ceremony at the Vatican on March 24.

Benedict also named the archbishops of Caracas, Venezuela; Seoul, Korea; Bordeaux, France; Toledo, Spain and Manila, Philippines. He also said his successor at the Congregation for the Doctrine of the Faith, Archbishop William Levada, would be made a cardinal, the second American among the new names.

Twelve of the 15 men are under the age of 80, and thus eligible to vote in a conclave to select Benedict's successor.

Benedict said the new cardinals "reflect the universality of the church. In fact, they come from various parts of the world and carry out different tasks in the service of the people of God."

The new cardinals come from 11 different countries from North and South America, Europe, Africa and Asia, reports the AP.