The Iraqi foreign minister on Wednesday told his Japanese counterpart Iraq will "hopefully" form a new government by the end of March, Foreign Ministry officials said. The comment came during a 15-minute phone conversation between Hoshyar Zebari and Taro Aso Wednesday afternoon, according to an official who spoke on condition of anonymity, citing protocol. 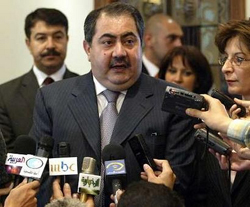 The two ministers did not touch on pullout plans by Japan 's ground troops in Iraq , the official said. News reports have said Japan , which has 600 non-combat troops in the southern Iraqi city of Samawah , may withdraw from Iraq by May.

Defense and Foreign Ministry officials have so far declined to confirm those reports. Following the Dec. 15 election, Iraq has yet to launch a government because of sharp differences among the country's Shiite, Sunni Arab and Kurdish political parties. Iraqi President Jalal Talabani conveyed a similar message to Japan 's ambassador to Iraq , Toshiro Suzuki, on Sunday in Baghdad , reports the AP.