Russian President Vladimir Putin said on Wednesday during a visit to Azerbaijan that he will invite the leader of Armenia to Moscow to breathe new life into talks over the disputed territory of Nagorno-Karabakh. 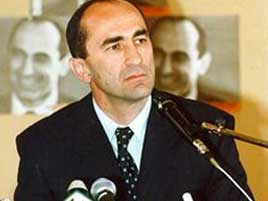 "I promised the president of Azerbaijan that we will initiate and conduct additional consultations with our Armenian partners. I intend soon to contact the Armenian president and invite him to Moscow ," Putin told a news conference after holding talks with his Azerbaijani counterpart Ilham Aliev. Presidents Robert Kocharian of Armenia and Ilham Aliev of Azerbaijan failed to reach a deal resolving the conflict earlier this month in two days of intense meetings outside Paris .

Nagorno-Karabakh is inside Azerbaijan but populated mostly by ethnic Armenians, who have controlled it since an uneasy 1994 cease-fire ended six years of open fighting. Russia , which is mediating in the dispute together with United States and France , is a close ally of Armenia and has a major military base there. Sporadic border clashes and land mines continue to kill people every year and the ongoing dispute has held up the region's development.

Hopes had built in recent months for settling the 18-year dispute that has killed at least 30,000 people. More than 1 million people have been displaced by the hostilities, which have also hindered investment in the strategic, oil-rich Caucasus region. But among the main sticking points were the future status of mountainous enclave and whether Armenian forces would withdraw from a key border area to make way for international peacekeepers.

"I seems to me, that he (Aliev) is right, there are chances, despite all the difficulties, to solve the problem," said Putin, reports the AP.